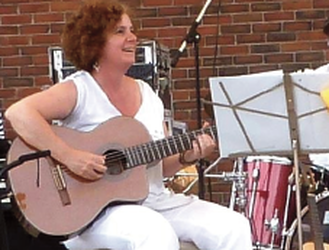 She later moved to the south of France, where she met the Brazilian vocalist Bia, with whom she toured European festivals and venues in Italy, Switzerland and Germany. She participated as musician and orchestrator on the CD “La Memoire du Vent,” which received the “Grand Prix de
l'Academie Charles Cros” (the equivalent of a U.S.Grammy Award). During this time, her music turned more toward jazz and improvised music, and she started composing.

After moving to Boston, Massachusetts, she finally recorded a CD of her own compositions, Dreamers’ Walk.The album featured the musicians she had been playing with: Jeff Galindo, Marty Ballou, Bob Gullotti, Bill Jones, Garth Stevenson and Miki Matsuki. Around that time, Marion created the Bright Street Trio, with Kenny Maurais and Ron Allman.


Throughout her musical career, Marion has always loved sharing her experience by teaching privately or in schools. She taught jazz ensemble at The Rivers School in Weston, Massachusetts, guitar ensemble at The International School of Boston in Cambridge, and created a special program for the mentally impaired, consisting of groundbreaking musical ensembles at the “Institut Medico-Educatif PRESENCE.”

In addition to her role as the guitarist in Dry Martini, Marion has been playing in several Boston-based bands: Cruzamente (CapeVerdean music), the duo Por Do Sol (Brazilian instrumental music “choro”). And in addition to playing both acoustic and electric guitar, she also plays cavaquinho, a kind of ukulele used in Portuguese, CapeVerdean and Brazilian music.

(To sample the diversity of Marion’s music, click here.)