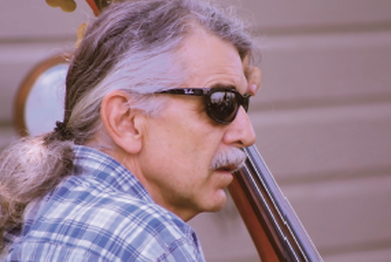 Jeff Lind was born in Midland, Michigan, but grew up in Nashua, New Hampshire, where he studied piano and trumpet and later switched to tuba, playing in the high school band and the New Hampshire Youth Symphony. While at Summer Youth Music School at University of New Hampshire in 1961, he discovered the string bass and never looked back.

In the beginning of his career as a bassist, Jeff played with folk trios in the Kingston Trio mode, at the same time beginning to listen to jazz, playing in
school dance bands and starting a general business “combo.”

College years saw little jazz on Jeff’s gigging schedule and more folk-oriented groups in which he
played acoustic bass, and rock‘n’roll on electric bass. After college, he played electric bass in rock‘n’roll and blues groups and later moved to fretless electric to join the Charlie Bechler group, which included the legendary local saxophonist Jimmy Cameron out of Newburyport, for several years. It was in this context that he met, among others, Larry Garland, Sam Barrios, and Carl Pehrsson, as he played string bass at local and regional jazz venues.

The Press Room in Portsmouth offered him 20 plus years of Friday night Celtic sessions and a rotation with the Tuesday night jazz session.

Back to electric bass, Jeff played with the Crawdad Wranglers, a Cajun and zydeco quintet, once opening for Judy Collins,while playing string bass in different configurations from duos to quintets. A long-standing jazz duo with Brian Richardson (still ongoing) led indirectly to his present-day membership in Dry Martini.

Jeff’s day job is as a custom furniture maker and wood worker.The bass he plays today is one he made in 1993.

(To be dazzled by the quality of Jeff’s woodworking, click here.)