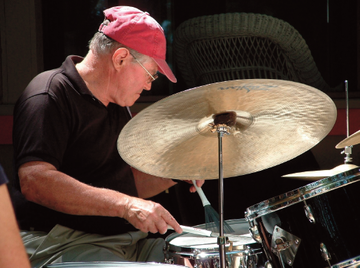 Terry MacDonald grew up in Newton, Massachusetts, where he studied piano and later drums in the city’s excellent school music program. He began gigging at the age of 14, and by the time he arrived at Boston College, was playing enough gigs, and booking other bands, that he was able to pay his own way through college—a feat, admittedly, not possible in today’s economy. During the summer between his freshman and sophomore years at BC, he toured with a USO show, playing drums in a big band, entertaining U.S. troops throughout the Caribbean, the BritishWest Indies, and then up to Iceland. During his senior year at BC, already entrepreneurial, he created a jazz club, which he named the Campus Club to appeal to fellow students, and led a jazz quintet there every week, performing for full-house audiences.

After college, marrying his wife, Peg, and serving as an officer in the U.S.Army, he returned to the Boston area, where he began his career in the advertising agency industry. At the same time, he continued gigging, and even took five more years of drum lessons, this time with the legendary Boston drummer and teacher Alan Dawson, who taught at the time at Berklee College of Music.

Over the years,Terry had opportunities to play with and learn much from such jazz musicians as Roger Kellaway, John Neves, Dick Sudhalter, Joe Raposo, Dick Johnson, Phil Wilson, Sadao Watanabe, Bruce Cale, BobWinter, Lenny Hambro, Brad Terry, and so many others. It was heady stuff for him, but it was not to last. By 1976,Terry was president and creative director of one of New England’s most important advertising agencies of its time, the Boston-based Pearson and MacDonald, Inc. He and Peg were raising their daughter, Karen. And Terry was playing as many as four gigs a week. “That’s three big commitments,” Peg effectively pointed out.“Pick two.”

And so ended Terry MacDonald’s gigging career. Not forever, though, because Terry was determined that, when it was time to retire from advertising, he’d take some more lessons and get back on the bandstand. In fact, when he’d see his former teacher and friend Alan Dawson over the years, he’d tell Alan that, one of these days, he’d be back for more lessons. Alan would laugh, saying, “You’ll be in your sixties, and I’ll be in my seventies!” Didn’t matter: That was the plan. And it would have happened, too, but for the fact that Alan Dawson died in 1996, just a few years before Terry began to wind down his career in advertising. When that did happen, in 1999, after a 23-year break, Terry took up drumming again, with five more years of lessons, this time with the world-class drummer Bob Gullotti. (Yes, this was howTerry met Marion, Bob’s wife.)
​
When Terry and Peg moved to Portsmouth in 2001,Terry began to insinuate himself into the Seacoast jazz scene, showing up at The Press Room on Tuesday nights to sit in at the Larry Garland jam, later joining Larry’s midday Saturday jazz group at The Press Room. He also produced a weekly jazz show on Portsmouth’s community radio station, and, of course, launched the jazz trio Dry Martini. As the leader of Dry Martini, Terry books the gigs and organizes the play list.